﻿﻿Put On The Whole Armor Of God That Ye May Be Able To
Stand Against The Wiles Of The Devil Ephesians 6:11﻿﻿

For We Wrestle Not Against Flesh And Blood, But Against Principalities, Against Powers, Against The Rulers Of The Darkness Of This World, Against Spiritual Wickedness In High Places. Ephesians 6:12 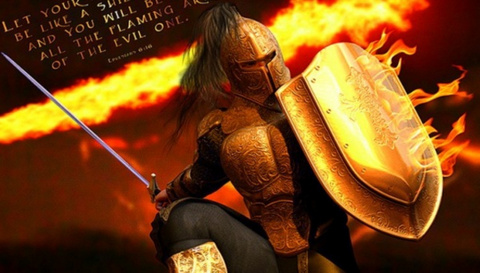 Life is indeed a “warfare;” and just as a man enlists in our army for a term of years, and then his service runs out, and he is free, so every believer is enlisted in the service of life, to serve God till his enlistment is over, and we sleep in death. Our charge and our armor we shall put off together.

Brethren, you are soldiers, enlisted when you believed in Jesus. Let me remind you that you are a soldier, you will be always at war, you will never have a furlough or conclude a treaty. Like the old knights who slept in their armor, you will be attacked even in your rest.

There is no part of the journey to heaven which is secure from the enemy, and no moment, not even the sweet rest of the Lord’s day, when the clarion may not sound.

Therefore, prepare yourselves always for the battle. “Put on the whole armor of God,” and look upon life as a continued battle. Be surprised when you have not to fight; be wonderstruck when the world is peaceful towards you; be astonished when your old corruptions do not rise and assault you.

You must travel with your swords always drawn, and you may as well throw away the scabbard, for you will never want it. You are a soldier who must always fight, and by the light of battle you must survey the whole of your life.

Eph 6:11  Put on the whole armour of God, that ye may be able to stand against the wiles of the devil.

Put on the whole armour of God,.... Not that which God himself is sometimes clothed with, and uses against his enemies; but what he has provided for his people, and furnishes them with; the particulars of which are after mentioned: and it is called the armour of God, because it is prepared by him for his people, and is bestowed on them by him; and because it is in its own nature divine and spiritual, and not carnal; and because it is provided for fighting the Lord's battles, and is used in them; and because the efficacy of it is from him, and the execution it does is owing to him: and it is whole, complete, and perfect; and all of it is useful, and no part to be neglected, but all to be taken and "put on"; which is not to make and provide this armour, but to take it, as in Eph_6:13; as being ready made and provided, and to expect and prepare for battle, and make use of it; and this supposes saints to be in a warfare state, and that they are in the character of soldiers, and have enemies to fight with, and therefore should be accoutred with proper and suitable armour, to meet them:

That ye may be able to stand against the wiles of the devil; who is the grand enemy of Christ and his people, and a very powerful and cunning one he is; so that the whole armour of God should be put on, which is proof against all his might and craft, in order to stand against him, oppose him, and fight, and get the victory over him, which in the issue is always obtained by believers; for they not only stand their ground in the strength of Christ, and by the use of their armour confound his schemes, and baffle all his arts and stratagems, but are more than conquerors through him that has loved them.

Eph 6:12  For we wrestle not against flesh and blood, but against principalities, against powers, against the rulers of the darkness of this world, against spiritual wickedness in high places.

This is a reason why saints should be strong in the Lord, and why they should put on the whole armour of God, and prepare for battle, since their enemies are such as here described: not flesh and blood; frail mortal men,

For we wrestle not against flesh and blood
For this wrestling  is not of the body but of the soul
And not with men only, for otherwise the saints have a conflict with men; with profane men, and wrestle against them

But against principalities, against powers
But the rulers of the darkness of this world, or of the dark Heathen world, and were in high places, and were of wicked and malicious spirits, against the people of Christ; and though they were in high, yet not in heavenly places;  the enemy being the devil, and the armour spiritual; wherefore the devils are here designed, who are described from their power, rule, and government

Against spiritual wickedness in high places; or wicked spirits, as the devils are, unclean, proud, lying, deceitful, and malicious; who may be said to be in "high" or "heavenly places"; not in places super celestial, or in the highest heavens, in the third heaven, where God, angels, and saints are; but in the aerial heavens, where the power or posse of devils reside, and where they are above us, over our heads, and watching every advantage against us; and therefore we should have on our armour, and be in a readiness to engage them;

This verse of Ephesians 6:12 is basically saying. Hey people you are not dealing with people here ok...flesh and blood creatures. You are dealing with an unseen force..an evil force... darkness...wickedness....evil spirits..

So can you deal with an unseen evil force by flesh and blood means? NO YOU CANNOT!!! We fight these forces with the weapons the LORD has given us.. Prayer, Worship, Truth, The Word of God, Faith, Our Assurance of Salvation, Righteousness or Right doing, The Gospel of Peace.

We OVERCOME The evil one by the Word of our Testimony and By The Blood Of Jesus Christ!!! Amen and Amen!!!

Eph 6:13  Wherefore take unto you the whole armour of God, that ye may be able to with stand in the evil day, and having done all, to stand

Wherefore take unto you the whole armour of God,.... This is a repetition of the exhortation in Eph_6:11; which repetition seems necessary by reason of the many powerful enemies mentioned in the preceding verse, and serves to explain what is meant by putting it on: and leads on the apostle to give an account of the several parts of this armour:

And having done all to stand; or having overcome, having routed the enemy, stand as conquerors; or rather, having took and put on the whole armour of God, in order to stand, and withstand the enemy. We are in the evil day and putting on the Armor of God is so crucial to our Spiritual welfare to be able to Stand As Conquerors and Overcomers in this hour. Once again this is Not an option It is a Command in order that we be ready and clothed for the battle and that we be able to Stand in this evil day.